The Dubuque County Courthouse is located in Dubuque, Iowa. The current building 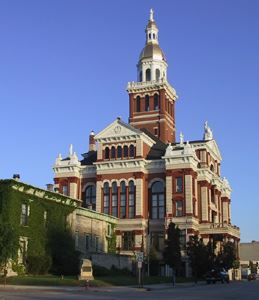 was built in 1891 to replace an earlier building that was built in 1839. The courthouse serves as the center of county government offices and is a dominant landmark in the downtown Dubuque area. It is located at Seventh and Central Avenue in Dubuque.

The Dubuque County Courthouse is on the National Register of Historic Places. It was one of the first buildings in the Dubuque area so honored. Fridolin Heer – who designed several other notable buildings in Dubuque, including Sacred Heart Church – was chosen as the architect for this project. Heer decided to use Beaux-Arts Architecture – a large and grand style with a great amount of detail, large columns, elaborate moldings, and freestanding statuary in the design of the courthouse. 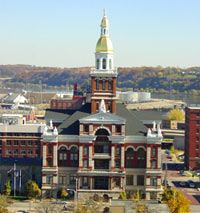 a bronze statue of Lady Justice that is 14 feet tall. Other pewter statues are also on the building. Several other statues were taken down during World War I and melted down to provide material for the war effort.

Over the years, a number of renovations were done to the building. A unique five-story glass-encased elevator was installed – it is one of the few glass-walled elevators currently in the city. Ground floor entrances were added on Central Avenue A granite fountain was placed on the ground floor and the plaster was removed from the ground floor interior walls exposing the original brick.

On the outside, a controversial gold leaf coat was added to the dome on the central tower. However, the initial application of gold leafing did not hold up well under various weather conditions, so it took further work to repair the leafing on the dome.